پرش به محتوا
This is Marion, my in-town rooster*, who had been Rosemary until a few days after “the red boys” (aka the packing peanuts that came with my order from Ideal), went to freezer camp.

He was a Light Brahma and had a lovely, deep, melodious crow but, at 2 feet tall, was a little hard on the non-Brahma hens who didn’t have the thick feathers to protect them like the Brahma girls did. He lived up the the Brahma’s reputation for laid back roosters and never made an aggressive move to me when I was working in the coop. 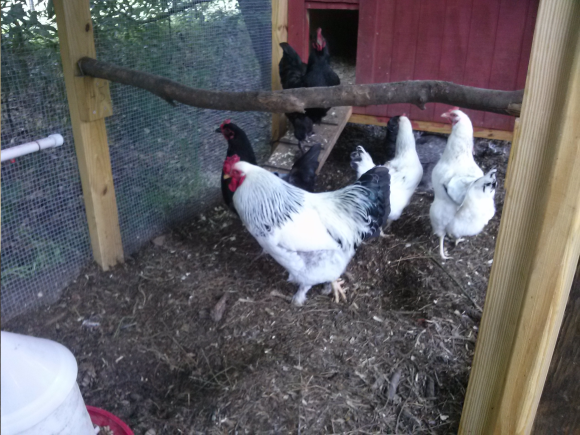 I only got the girls this summer and haven’t seen any signs yet of getting another “oops” rooster from this batch. But when I get more chicks for the larger facility next year I intend to have a rooster again.

I’m undecided about breeds. I haven’t had enough chickens to really get a feel for what I like best — other than black, white, and black and white. I love the beauty of the Light and Dark Brahmas, but they aren’t necessarily the best option for the goal of possibly selling surplus eggs at farmer’s markets.

The rooster will be half the flock so I will need to choose carefully.